The first coinage (commonly called the "young head" coinage) of George II. resembles that of his father, except that his head is turned to the left instead of to the right, and there is no linear inner circle on either side of the coins. The warrant for the execution and issue of pieces under this coinage is dated July 21st, 1729, and was signed by Queen Caroline, as guardian of the kingdom during the absence of the king in Germany. These coins, which were the work of Croker, consisted of halfpennies and farthings only.

1. O. GEORGIVS. II. REX. The king's head to the left, laureate, with short curling hair. Armour plain.
R. BRITANNIA. Figure as before, but larger in size and of bolder work. The date in the exergue. R. 1. 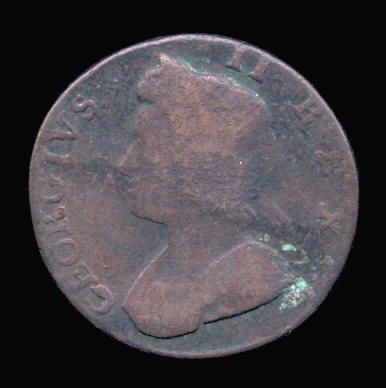 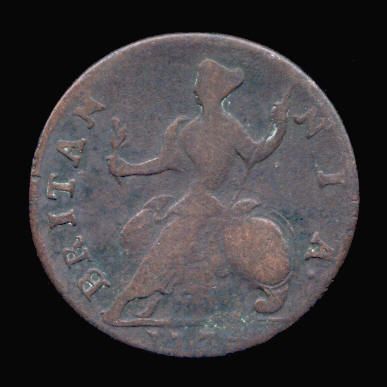 These occur of the dates 1729 to 1739 inclusive. Proofs of the halfpenny of 1729 exist in copper, bronze and silver. A halfpenny of 1730 is remarkable for the omission of the letter R in the king's name, which reads, therefore, GEOGIVS. REX. This was called in afterwards, and another, with the name correctly spelt, occurs of the same year. A bronze proof of the same date of the ordinary type was lately in my collection and is now in that of Mr. Caldecott. The halfpenny of 1735 sometimes bears the date in smaller figures.

In 1740 a new copper coinage took place. The head is older, and the engraver was John S. Tanner, who about that time was appointed Chief Engraver to the Mint in succession to Croker. 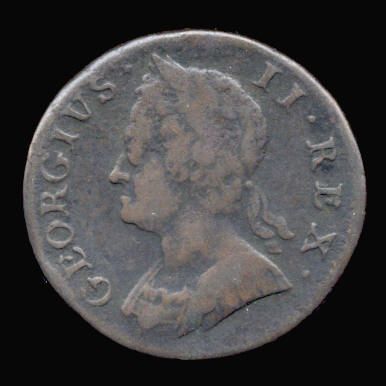 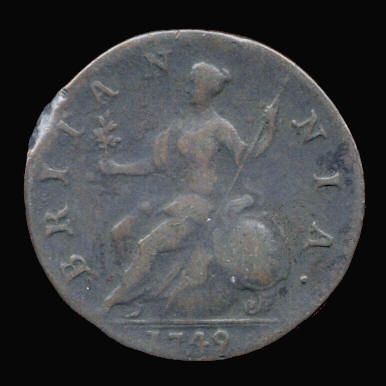 These occur of the dates 1740 to 1754 inclusive, with the exception perhaps of 1741, of which year I have failed hitherto to discover one, although a peculiar piece bearing that date and intermediate in size between a halfpenny and a farthing was in the cabinet of the late Mr. C. H. Nash. No proof of either the halfpenny or farthing are known. The U in the king's name on the halfpennies from 1740 to 1745 inclusive is formed in the modern fashion, but subsequently the old form of V was again resorted to.

The forgeries of copper coins during this reign was conducted on a most alarming basis, and formed the subject of much complaint. Petitions were presented to the King in Council, and amongst other suggestions was one to the effect that the nominal value of the coins should be reduced by one-third, it being clear that the forgeries were due to the great difference between their nominal and intrinsic values. No effective remedy was, however, introduced, and the grievance continued during the early part of the next reign.