The first copper coinage of this monarch consisted of farthings only. They are the work of Pistrucci, and the whole series, of which they formed part, was distasteful to the king. They represent the face as puffed and bloated, the neck undoubtedly thick, and the hair harsh and wiry.

1. O. GEORGIUS IIII DEI GRATIA. The head as described above, looking to the left, laureate and draped in a mantle, clasped on the shoulder by a brooch.
R. BRITANNIAR : REX FID : DEF : Britannia seated to the right, helmeted, an olive branch in her right hand; a trident in her left; at her feet, a lion. Date in exergue. 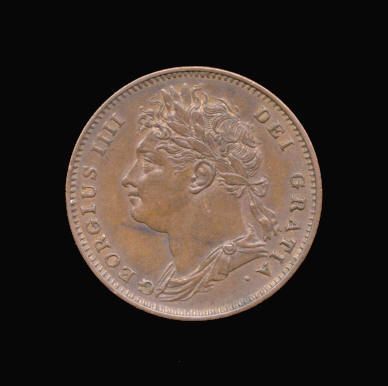 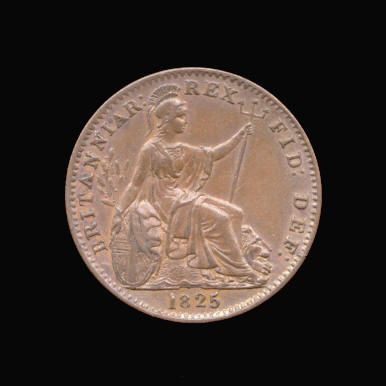 This coin is surrounded by a raised edge, within which is a dotted circle, and this, with variations, has occurred on all subsequent copper coins. The following dates occur: 1821, 1822, 1823, 1825, and 1826. The last date is rare and curious, as it occurs after Wyon's coinage had been issued. There is a very rare (perhaps unique) copper proof of 1821 and others of the date 1822.

There is also a "mule" in platinum (R. 8) with the reverse of the farthing of this coinage but with the obverse of the Bank Token for ninepence of 1812.

In 1825 the king objected very strongly to the continuance of Pistrucci's portrait, and requested that artist to design a fresh model from the picture then recently painted by Sir Thomas Lawrence. This Pistrucci very reasonably refused to do, for the portrait by Lawrence was a full-faced one, and could be of very little use in obtaining a likeness in profile. The king then proposed that Chantrey, whose bust had given him great satisfaction, should execute a medallion from it, and that Pistrucci should re-model his coins by this; but the latter declined to copy the work of any other artist, and as the king refused to sit again, the work was committed to Mr. William Wyon. The series in copper consisted of the penny, halfpenny, farthing, half-farthing, and third-farthing. The half-farthing, which is of the dates 1828 and 1830, was for the use of Ceylon, and the third-farthing, which occurs of the date 1827 only, for that of Malta.

2. O. GEORGIUS IV DEI GRATIA. The bust of the king, laureate, looking to the left. No drapery. Under the head, the date between two small ornamental mint marks.
R. BRITANNIAR : REX FID : DEF : Britannia as before, but without the olive branch and lion; the right arm resting on the shield. In the exergue the rose, thistle, and shamrock intertwined. 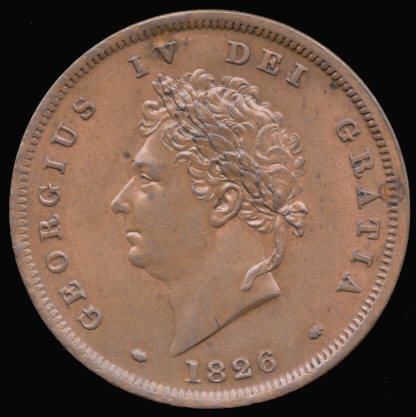 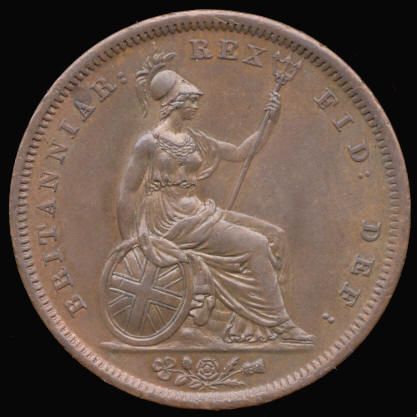 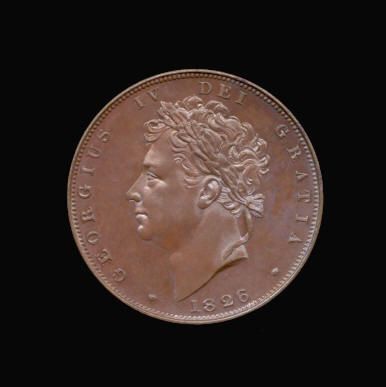 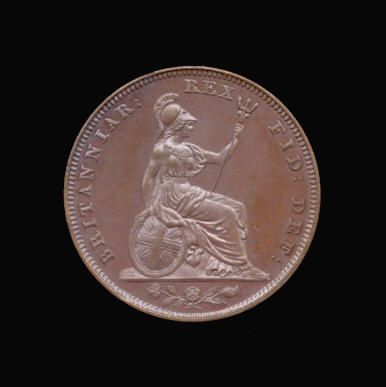 In the cabinet of Mr. R. A. Hoblyn and in the Imperial Cabinet at Vienna (the former from the Bergne and Cuff collections) is a coin which as the obverse of the Irish penny of this sovereign and the reverse of the Ionian Islands piece (penny size) by Wyon. This has been considered as a pattern piece, but must be treated as a mere "mule," particularly as it, of necessity, bears no date.